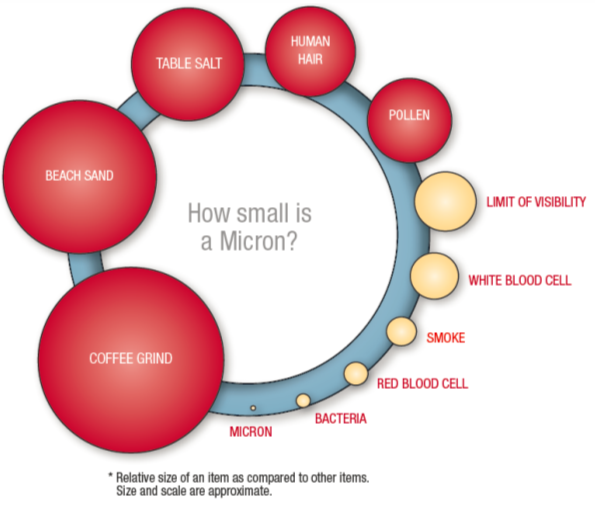 In the business of particle size reduction you may hear the word, ‘micron’ thrown around. So, what exactly is a micron, and how small is it? In the material reduction industry, micron size is a ‘big’ deal.

Let’s take a step back and first define the word itself, ‘micron’ is a shortened word for ‘micrometer’, it comes from the Greek word “Mikros” which means small. (That’s an understatement if we ever heard one, but the Greeks know their stuff so we’ll let it slide.)

A micron is a unit of measure in the metric system specifically used for measuring particle size. Get ready for your mind to be blown; one millimeter equals one thousand micron, and one micron equals one-thousandth of a millimeter.

You may also hear about mesh, which is another unit of measurement relating to screens that particles pass through. Five mesh, means there are five little squares across one linear inch of screen, whereas a 100 mesh screen has 100 openings and so on. So the higher the mesh, the smaller the particle size. This is the exact opposite of millimeters and microns which decrease with particle size reduction.

The Sturtevant Micronizer has the ability to reduce particle size down to .25 microns. Since 44 microns is the limit of visibility, what our jet mill can product can’t even be seen as individual particles.

So the next time someone is making a big deal a bout how small something is, you now have the ability to ‘school’ them on how big, their small really is, compared to a micron, of course.

Minncare Sterilant Protects You And Your System

March 16, 2020
I would just like to share what a pleasure it has been to work with Jim Lyon [and team] over the years. ...He and SepSol were quick to supply samples of various filtering media for lab scale evaluations. ... Thanks again Jim!
Mark KeinathDow Corning
Jim is an outstanding salesperson and an outstanding person. His in-depth questioning skills affords him the ability to collect and utilize a large amount of insight to solve problems and come up with creative solutions.
Jimmy A. NelsonPh.D., CPLP
Sepsol is a very unique and diversified company. They represent a wide variety of material handling partners and are very capable of supporting a wide variety of projects in many varying manufacturing fields.
Craig UlshAbbott Nutrition